The Carolina Junior Hurricanes Super 8 Red team wrapped up their season in style, winning the Country Western Showdown in Nashville, TN over the weekend of March 19th-21st. Playing their best hockey of the season, the team started strong and won their first three games. In the final game of the qualifying round the team faced the St. Peters Spirit. After falling behind for the first time in the tournament, the boys dug in and were able to breakthrough on the scoreboard midway through the game to even the score. The Spirit came charging back with several breakaway opportunities that the Jr. Canes netminder was able to turn away, keeping the score tied at 1-1. With a little under 10 minutes to play, the boys took their first lead of the day and wrapped up the game 3-1.

In the semi-final round, the team faced the Spirit again in a rematch from the previous day. This time the boys took a quick lead and never looked back, winning the game 13-4 and securing a spot in the championship against the Meramac Sharks. Despite the Red Team making it to the finals several times earlier in the season, they had yet to win the final game in a tournament. After some pregame tunes in the locker room to get the boys pumped up and a little pep-talk from the coaches, they hit the ice ready to play and started off strong, jumping out to a 2-0 lead. Midway through the first period though the Sharks pushed back to take a one goal lead, however, the Jr. Canes persevered and answered with a goal to tie the game at 3 just before the end of the first period. With one period remaining these Super 8’s came out more determined than ever and were able to control the game on both ends of the ice. Using a combination of teamwork, conditioning, and skill that they had developed all season they played hard through the final buzzer, winning the game 8-5, and earning their first ever championship title! 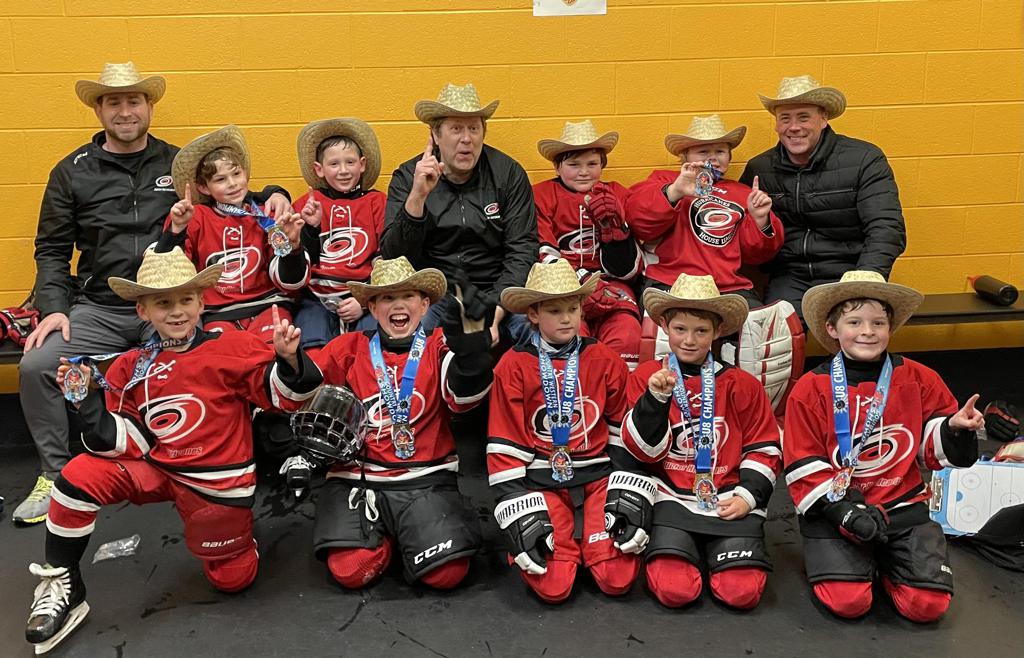